Split-screen mode, available on most phone and tablet devices, provides a split screen environment where two activities appear either side by side or one above the other. A moveable divider is provided which, when dragged by the user, adjusts the percentage of the screen assigned to each of the adjacent activities:

Freeform mode provides a windowing environment on devices with larger screens and is currently enabled at the discretion of the device manufacturer. Freeform differs from split-screen mode in that it allows each activity to appear in a separate, resizable window and is not limited to two activities being displayed concurrently. Following figure, for example, shows a device in freeform mode with the Calculator and Contacts apps displayed in separate windows: 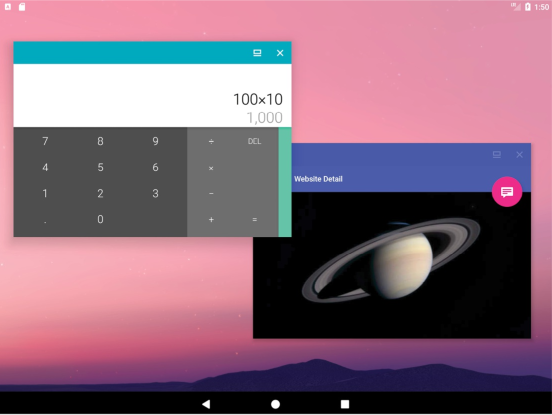 Picture-in-picture support, as the name suggests, allows video playback to continue in a smaller window while the user performs other tasks. At present this feature is only available on Android TV.

Enabling Multi-Window Support in an App

Add this to your application or activity tag in AndroidManifest.xml:

Adding it to application will make all activities realizable, while adding it to a specific activity will keep other activities incompatible with resizing.

If your targetSdkVersion is 24 (Nougat) or higher, this will be set to true by default (you can still turn it off by setting the param to false).

The android:resizableActivity manifest file setting controls whether multi-window behavior is supported by an app. This setting can be made at either the application or individual activity levels. The following fragment, for example, configures the activity named MainActivity to support both split-screen and freeform multi-window modes:

Detecting Multi-Window Mode in an Activity

Situations may arise where an activity needs to detect whether it is currently being displayed to the user in multi-window mode. The current status can be obtained via a call to the isInMultiWindowMode() method of the Activity class. When called, this method returns a true or false value depending on whether or not the activity is currently full screen:

An activity will receive notification that it is entering or exiting multi-window mode if it overrides the onMultiWindowModeChanged() callback method.

The first argument passed to this method is true on entering multi-window mode, and false when the activity exits the mode. The new configuration settings are contained within the Configuration object passed as the second argument:

Launching an Activity in Multi-Window Mode

In the Getting started with Explicit, Implicit and Pending Intents, an example app was created in which an activity uses an intent to launch a second activity. By default, activities launched via an intent are considered to reside in the same task stack as the originating activity. An activity can, however, be launched into a new task stack by passing through the appropriate flags with the intent.

In order to launch an activity into a new task stack, the following flags must be set on the intent before it is started:

The following code, for example, configures and launches a second activity designed to appear in a separate window:

In God we trust. All others must bring data.
W. Edwards Deming