This is one of the most widely used approaches in software development. The MVC consists of three main components:

All of these components interact with each other and perform specific tasks, as shown in the following figure.

The key points of MVC is:

It has been noticed that Android is not able to follow the MVC architecture completely, as activity/fragment can act as both the controller and the view, which makes all the code cluttered in one place. Activity/fragment can be used to drawmultiple views for a single screen in an app, thus all different data calls and views are populated in the same place. Therefore, to solve this problem, we can use different design patterns or can implement MVC carefully by taking care of conventions and following proper programming guidelines.

The following shows a basic example of how MVC is used in Android.

Model View Presenter (MVP) is derived from the MVC pattern. MVP is used to minimize the high dependency on the view, which is the case in the MVC. It separates the view and model by using the presenter. The presenter decides what should be displayed on the view.

The interaction between the various components of the MVP are shown in the following figure.

Important points of MVP are: 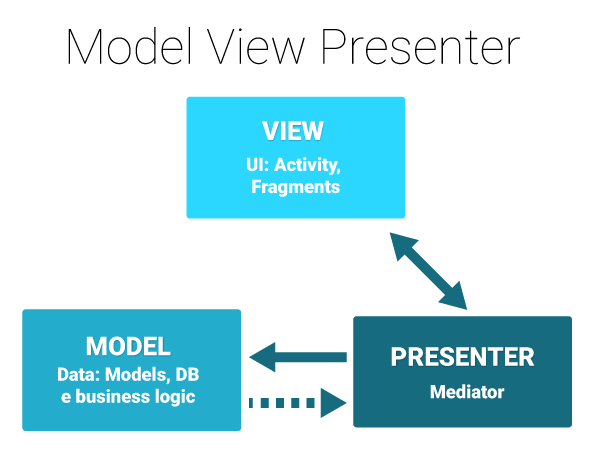 Following are some reasons which makes MVP a good architectural pattern for Android:

In this example, we will show how the MVP design can be used to display a list into a RecyclerView.

The model (LocationInteractorImpl) then uses the listener.onSuccess and listener.onFailed methods to send results back to the presenter:

The LocationInterface class is used by the presenter to communicate with the view:

The LocationListActivity is the view where all the interaction with the user will happen. The view implements the LocationInterface, by which it gets the responses from the presenter. The view uses an instance of the presenter.

It then calls the presenter.loadLocations() to tell the presenter that it wants the list of locations to be displayed.

So, the key points of MVP is:

The supposed benefit of MVP is that there is a well-defined contract between Presenter and View, and it can be verified that "under the right circumstances, the Presenter calls the right methods on the View".

There is hidden cost that the Presenter is typically bound to a single View, so argument passing between Presenters and hierarchic relations of the Views themselves can introduce difficulty: maintaining the existence of and communication between child presenters and sibling presenters (if they exist) is tricky. This can be avoided if the Presenter is shared between Views of the same flow.

The downside is that:

MVVM stands for Model-View-View-Model. It is similar to the MVC model, the only difference being it has two-way data binding with the view and view-model. The changes in the view are being propagated via the view-model, which uses an observer pattern to communicate between the view-model and the model. The view in this case is completely isolated from the model.

The major advantage of using MVVM is it enables automatic changes in the view via the view-model:

MVVM has the following components:

In developer's terminology, one can say that the view-model is the interface between a designer and a coder.

The key points of MVVM is: