An Overview of the Android Architecture Android 12.05.2018

Android is structured in the form of a software stack comprising applications, an operating system, run-time environment, middleware, services and libraries. 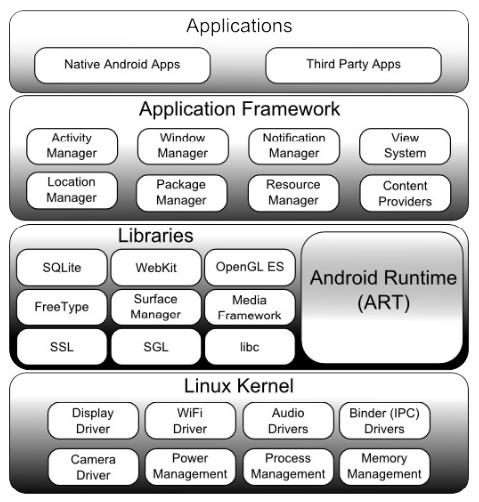 Each layer of the stack, and the corresponding elements within each layer, are tightly integrated and carefully tuned to provide the optimal application development and execution environment for mobile devices.

Positioned at the bottom of the Android software stack, the Linux Kernel provides a level of abstraction between the device hardware and the upper layers of the Android software stack. The kernel provides preemptive multitasking, low-level core system services such as memory, process and power management in addition to providing a network stack and device drivers for hardware such as the device display, Wi-Fi and audio.

When an Android app is built within Android Studio it is compiled into an intermediate bytecode format (referred to as DEX format). When the application is subsequently loaded onto the device, the Android Runtime (ART) uses a process referred to as Ahead-of-Time (AOT) compilation to translate the bytecode down to the native instructions required by the device processor. This format is known as Executable and Linkable Format (ELF).

Each time the application is subsequently launched, the ELF executable version is run, resulting in faster application performance and improved battery life.

This contrasts with the Just-in-Time (JIT) compilation approach used in older Android implementations whereby the bytecode was translated within a virtual machine (VM) each time the application was launched.

In addition to a set of standard Java development libraries (providing support for such general purpose tasks as string handling, networking and file manipulation), the Android development environment also includes the Android Libraries. These are a set of Java-based libraries that are specific to Android development. Examples of libraries in this category include the application framework libraries in addition to those that facilitate user interface building, graphics drawing and database access.

A summary of some key core Android libraries available to the Android developer is as follows:

The Android runtime core libraries outlined in the preceding section are Java-based and provide the primary APIs for developers writing Android applications. It is important to note, however, that the core libraries do not perform much of the actual work and are, in fact, essentially Java "wrappers" around a set of C/C++ based libraries. When making calls, for example, to the android.opengl library to draw 3D graphics on the device display, the library actually ultimately makes calls to the OpenGL ES C++ library which, in turn, works with the underlying Linux kernel to perform the drawing tasks.

In practice, the typical Android application developer will access these libraries solely through the Java based Android core library APIs. In the event that direct access to these libraries is needed, this can be achieved using the Android Native Development Kit (NDK), the purpose of which is to call the native methods of non-Java or Kotlin programming languages (such as C and C++) from within Java code using the Java Native Interface (JNI).

This concept is taken a step further in that an application is also able to publish its capabilities along with any corresponding data so that they can be found and reused by other applications.

Located at the top of the Android software stack are the applications. These comprise both the native applications provided with the particular Android implementation (for example web browser and email applications) and the third party applications installed by the user after purchasing the device.