In Android, almost everything is a resource. Resources are used for anything from defining colors, images, layouts, menus, and string values. The value of this is that nothing is hardcoded. Everything is defined in these resource files and then can be referenced within your application's code.

Since it is not always possible to develop a single design that will scale to fit every screen size, density, and orientation, Android OS provides us with the ability to create our own resource folder (/res) layout subfolder names, so that we can provide custom UI designs for different screen sizes and orientations. Android looks at our user’s screen characteristics at run-time, and selects the correct UI design, based on layout folder naming.

In addition, note the following key files stored within the values folder mentioned above:

For the full list of resource types, check out the Providing a Resource guide.

There are four important rules to remember when creating alternative resources:

The following list gives the qualifiers you can use to customize your resource values:

Before continue, read about Android screen densities. You'll know about difference between DPI and DP.

For example, one best practice is to ensure that all images are provided for multiple screen densities. 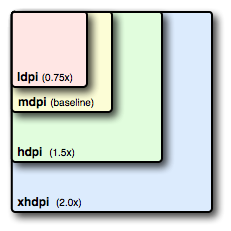 What do all these letters and numbers mean to you? A given image will appear larger on a screen with a lower density and smaller on a screen with a higher density. If you take a piece of paper and draw a vertical line and a horizontal line, splitting it into four pieces, a single piece (pixel) will take up a quarter of the paper. If you divide each of those quarters into four pieces, then a single piece (pixel) is one fourth of the size that it was. The pixel appears physically smaller even though the total size of the paper (the screen) has not changed. 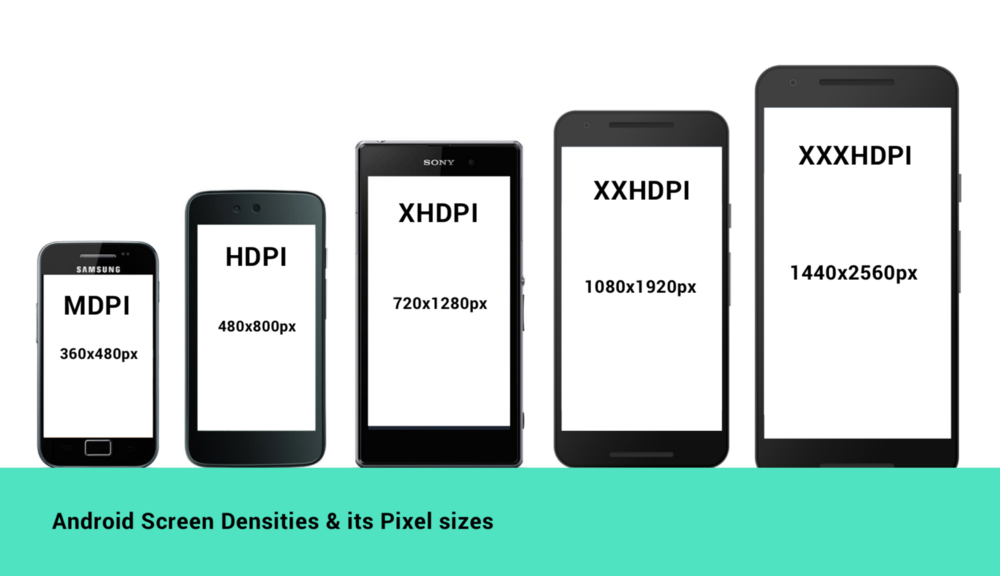 You can find DPI for different devices at dpi.lv.

This is achieved by having res/drawable-hdpi, res/drawable-xhdpi, and res/drawable-xxhdpi folders with different versions of the same image. The correct resource is then selected automatically by the system based on the device density.

If you wanted to specify a portrait UI layout for any of these non-normal-size resource qualifier names, you would then add -port to the end of your folder name. Thus, if you had a small screen portrait UI design, you would have that design in a specially named /res/layout-small-port folder. It is important to note that the -port must always come after the size modifier.

If you wanted to specify landscape UI layouts for any of these non-normal−sized resource qualifier names, you would then add -land to the end of your folder name. Thus if you had a large screen landscape UI design, you would have that design in a specially named /res/layout-large-land folder. It is important to note that the -land must always come after the size modifier.

Normal, also known as medium-sized screen layout designs, do not require a resource qualifier. These UI designs would be kept in the root UI layout folder, or the /res/layout folder, and this "primary" or default UI design would also define the name use for the other files in the other folders.

Sometimes it's a good idea to create image with grid and check view zone on all available devices. For this you can use proportion calculator and gradient maker with steps.

Useful for designer
Following is a list of resources for different devices' density (in pixels).

What these do is to give the developer a much finer numeric control over a given UI design to screen characteristics pairing. With the small, medium, large, and xlarge resource qualifiers, developers had to rely on Android to determine what screen resolutions qualify for these general categories. A screen size specific resource qualifier allows for a pixel-precision value to be set by the developer, so there is zero guesswork as to what design will be used with any given physical screen resolution characteristics.

The SmallestWidth or -sw modifier looks at the smallest possible dimension of the screen, regardless of its orientation, which makes it significantly different from an AvailableWidth or -w modifier, which will change numeric value evaluation within the OS every time that a user changes their device orientation. The same goes for the AvailableHeight, or -h modifier.

SmallestWidth is used to determine whether enough DIP width is available for your UI design regardless of the orientation of the device. The most common dimension for an Android screen is 480 pixels, which is -sw480dp and is found in devices with 320x480, 480x800, and 480x854 resolution screens. The next most common is 800 pixels, common in 480x800 and 800x1280 screen size devices, such as smartphones and tablets.

Now that smartwatches such as the Samsung Galaxy Gear are becoming popular, 320 pixel devices like a 320x320 Galaxy Gear or 320x480 entry-level touchscreen smartphone will also become a popular resolution, so a -sw320dp, -sw480dp, and -sw800dp qualifier will also be used quite frequently by Android developers.

It is important to note that the SmallestWidth calculation algorithm that is implemented by the Android OS takes into account any system chrome, that is, any Android OS UI elements such as status bars and bottom mounted virtual control button bars. This means the SmallestWidth algorithm won’t match the physical screen resolution, but rather the available resolution that can be used to contain your parent UI ViewGroup layout container.

The SmallestWidth -sw###dp qualifier can be used in conjunction with a -port and a -land qualifier, such as /res/layout-sw480dp-land to allow developer control over UI design for any screen size and orientation. This allows a developer precise control over not only how their UI fits any device, but also over how digital image or digital video content is displayed.

Since these -w###dp and -h###dp qualifiers can be used to determine one screen axis resolution, and since this changes with device orientation, you could use them with a -port and -land qualifier to match any popular resolution.

For instance -w480dp on its own would call both a 320x480 resolution entry level smartphone, when it is in landscape orientation, and also an 480x800 or 854x480 smartphone or tablet when it’s in portrait orientation. To also control which of these device scenarios you are matching your UI design to you can add -port and -land, so to fit a 320x480 entry-level (inexpensive) smartphone use -w320dp-port and use -w480dp-port to fit 800x480 or 854x480 smartphones or tablets when they are being used in portrait mode. It would be cool to be able to use these two together to specify a complete display screen resolution, but because they are in the same category this can’t be done currently. Luckily, it is just as effective, that is, you can achieve the same result, by using the size and orientation qualifiers together.

Following table shows some of the different types of Android devices and the DIP (or DP) screen size ranges, typical resolution and smallest width normally associated with each type of device.

It is also possible to restrict your applications to only run on devices that support certain screen size, density, and resolution characteristics. This is done by using an "analog" or equivalent of the resource qualifier that you just learned about (Smallest Width). This XML parameter is used inside the <supports-screens> tag, which is a child tag of your parent <manifest> tag for your application manifest.

The parameter is the android:requiresSmallestWidthDp parameter, which does the same thing as the -sw###dp resource qualifier, so it looks at the smaller of the two X:Y or W:H screen dimensions, and uses the tag format:

When the app is running, we can always check the current configuration (orientation, screen size, etc) by accessing the Configuration object through getResources().getConfiguration() within an activity or context object. For example, to determine the orientation (portrait or landscape) inside an activity, we can do:

We can similarly access this within any object by getting access to a Context object. For example, within an ArrayAdapter by using getContext().getResources().getConfiguration() to access the configurations.

You can get screen size in dp with following

There is one final concept to discuss when creating universal application UIs, and that is layout aliases. Often the same layout should be used for multiple device configurations, but chaining multiple resource qualifiers together (such as a smallest width qualifier and a traditional size qualifier) on the same resource directory can be problematic. This can often lead developers to create multiple copies of the same layout in different directories, which is a maintenance nightmare.

We can solve this problem with aliasing. By creating a single layout file in the default resource directory, we can create multiple aliases to that single file in resource-qualified values directories for each configuration that uses the layout. The following snippet illustrates an alias to the res/layout/main_tablet.xml file:

The name attribute represents the aliased name, which is the resource this alias is meant to represent in the selected configuration. This alias links the main_tablet.xml file to be used when R.layout.main is requested in code. This code could be placed into res/values-xlarge/layout.xml and res/values-sw720dp/layout.xml, and both configurations would link to the same layout.