Facade pattern provides a simplified interface to a complex subsystem.

The Facade pattern hides the complexities of the system and provides an interface to the client using which the client can access the system. It simplifies a client's interaction with a complex system by localizing the interactions into a single interface. A facade classes is used to provide a single interface to set of classes. As a result, the client can interact with a single object rather than being required to interact directly in complicated ways with the objects that make up the subsystem.

According to GoF Facade design pattern is:

Provide a unified interface to a set of interfaces in a subsystem. Facade Pattern defines a higher-level interface that makes the subsystem easier to use.

Facade design pattern is one among the other design patterns that promote loose coupling. It emphasizes one more important aspect of design which is abstraction. By hiding the complexity behind it and exposing a simple interface it achieves abstraction.

Mediator design pattern may look very similar to facade design pattern in terms of abstraction. Mediator abstracts the functionality of the subsystems in this way it is similar to the facade pattern. In the implementation of mediator pattern, subsystem or peers components are aware of the mediator and that interact with it. In the case of facade pattern, subsystems are not aware of the existence of facade. Only facade talks to the subsystems.

The following sequence diagram illustrates how the pattern is used by a client. 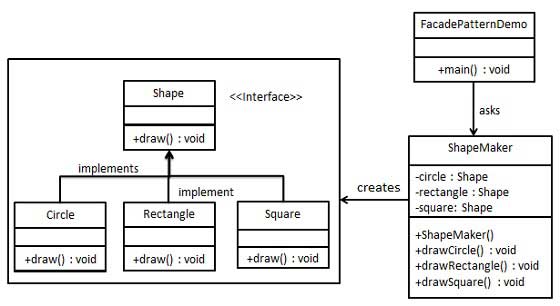 Use the facade to draw various types of shapes.