Singleton pattern ensures that only one object of a particular class is ever created.

Sometimes it’s important for some classes to have exactly one instance. There are many objects we only need one instance of them and if we, instantiate more than one, we’ll run into all sorts of problems like incorrect program behavior, overuse of resources, or inconsistent results.

Usually singletons are used for centralized management of internal or external resources and they provide a global point of access to themselves.

There are only two points in the definition of a singleton design pattern:

This sequence diagram shows how simple it is for a client to get an instance of the Singleton. 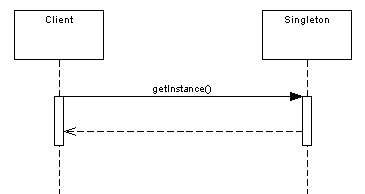 Kotlin just introduces a reserved keyword for that. Behold, an object as follows:

You don't need curly brackets there. They're just for visual consistency. This combines declaration and initialization in one keyword. From now on, MySingleton can be accessed from anywhere in your code, and there'll be exactly one instance of it.

Of course, this object doesn't do anything interesting. Let's make it count the number of invocations instead:

For now, we test it only to see how we call our Singleton:

This will print numbers between 1 and 10, as expected. As you can see, we don't need the getInstance() method at all.

Objects can't have constructors. If you want some kind of initialization logic for your Singleton, such as loading data from the database or over the network for the first time, you can use the init block instead:

It is also demonstrated that Singletons in Kotlin are initialized lazily, and not eagerly, as some could suspect from the ease of their declaration. Just like regular classes, objects can extend other classes and implement interfaces.

Let's look at how we implement the singleton pattern with Swift. The following code example shows how to create a singleton class:

We can see that, within the MySingleton class, we created a static constant named sharedInstance, which contains an instance of the MySingleton class. A static constant can be called without having to instantiate the class. Since we declared the sharedInstance constant static, only one instance will exist throughout the lifecycle of the application, thereby creating the singleton pattern.

We also created the private initiator that will restrict other code from creating another instance of the MySingleton class.

Now, let's see how this pattern works. The MySingleton pattern has another property, named number, which is an integer. We will monitor how this property changes as we use the sharedInstance property to create multiple variables of the MySingleton type, as shown in the following code:

All models are wrong, but some are useful.
George E. P. Box